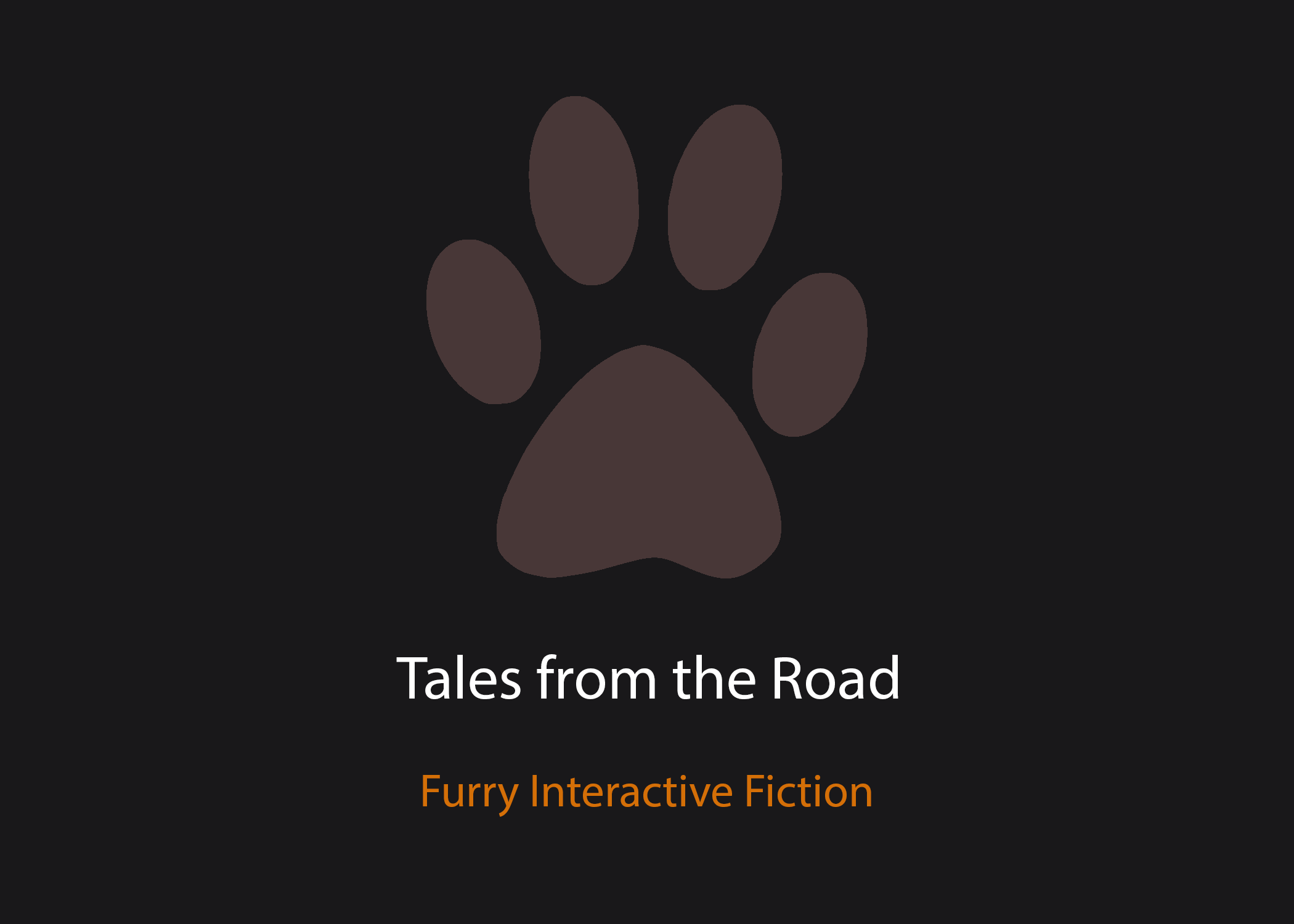 Tales from the Road – Furry Interactive Fiction - Made in Twine

Tales from the Road is a slice of life interactive fiction game. The game features a story about a disgruntled freelance worker who has grown bored of their work. Seeking to do something different with their life, they come up with the idea to go on an excursion across the country.

The game is currently in development and still has some time to go until I would consider it "finished". Despite this, there’s still a decent amount of content currently available. With total playtime hovering around 1-3 hours given the content that's in-game right now.

So, what is in the game?

Currently, the game has 4 fully completed chapters. With the first 3 chapters mainly laying the groundwork for the eventual excursion across the country. They introduce and develop the core cast of characters, while also providing a bit of backstory for the player character.

Chapter 4, the latest chapter to be completed, marks the actual start of the road trip. In which, the main cast of characters head to the first road trip stop, Chicago. With Sasha being the main focus of this chapter — most of your time will be spent exploring Chicago alongside her.

The next chapter, 5, is currently being worked on.

I'm planning for a total of 8 chapters, although chapter 4 and the proceeding chapters will be substantially longer than the first 3.

How is the game played?

The game is played in your standard Twine environment, which is to say it's mostly text-based. At the start, you’ll be asked to make your character which involves picking a name and race (Wolf, Lion, Fox, or Dragon). From there on you’ll be able to navigate the world, make choices, and go through dialogue by selecting certain inputs. See screenshots for examples.

Of the main cast of characters, 3 out of the 4 currently have artwork. This includes Sasha, Holly, and Valery. I do plan on getting art done for the 4th character, Jacob, at some point.

Speaking of, all artwork was done by the fantastic Kasscabel. Check out her Twitter page here or her Fiverr page here.

This game is mostly safe for work. There is swearing and some things that could be considered suggestive. Nothing crazy though.

If you encounter any bugs, feel free to let me know in the comments section. Even if you didn't have any problems, I'd appreciate hearing any feedback you might have!  Just post it on here via a rating (top right corner) or a comment. Helps let me know if I'm doing stuff right.

Tales from the Road will always be available for free on here. Donations are on for the standalone download if that's something you'd be interested in. Welcomed but not expected blah blah blah you know how it is.

Loyalty Freak Music (Static Shoes, Once more with you).

i dunno, but this was a good experience, and i hope it gets continued...

I am absolutely in love with your writing.

You can paint a picture, and the dialog is very.. organic? something! specifically the heavier moments are home runs. resonates somethin fierce. Hope you never lose the writing bug!

is it possible to take valery on the road trip?

you should be able to currently, yes! You have to go on and fully complete his date in order to be able to take him. Sorry for the late reply, I don't check this page too much anymore.

Date? I thought that's only able to be done with holly ;-;

What date with Valery? Is that the lunch thingy with him?

Also will this piece be continued? qwq

I'm not sure right now honestly. I've been so tangled up in real life for a while now. I'm in like the final stretch for college, have a boyfriend now, have my own place. I'd love to continue it but for now I don't really have any plans, unfortunately :(

so will it be postponed for the time being until you find time for it again? Or is this the end? qwq

If this doesn't get continued, then you'll at least have a little legacy of stuff here uwu

And one little question cause I never figured out how to get Valery into the road trip:

How does one go about successfully having lunch with a cute hyena? I want to bring him with badly qwq

Probably postponed indefinitely for now. I don't want to say I'll never work on it again because you never know what might happen. If anyone were to continue it on their own or anything like that, it'd be fine, I have no problem with that.

When you go get lunch with Valery, as long as you ask him lots of questions and respond positively, you should be able to take him to a nearby park once you're done eating. From there you get a little extra scene which should end with a kiss. So long as you get along with Valery well during this park scene you should be able to take him along on the road trip no problem!

I thank you and everyone else for all the support. No matter what the future holds, I greatly appreciate having you all along for the ride <3 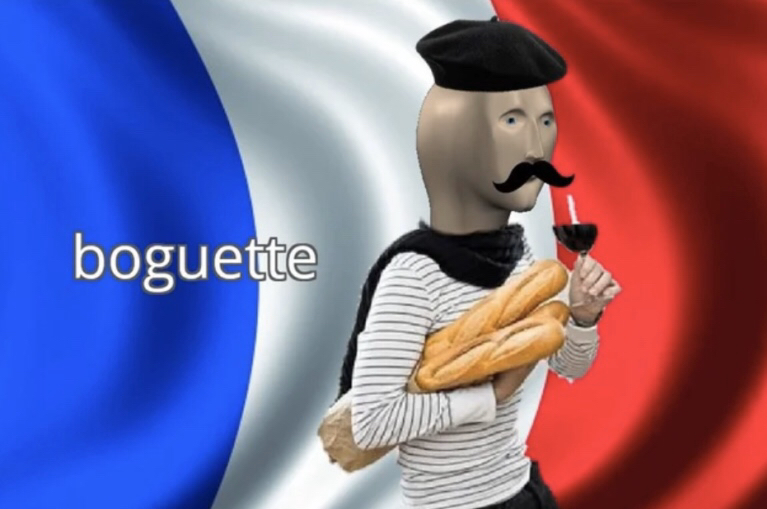 woow, i loved your game, the story is well written and the characters are very cute, i can't wait for the next update(≧▽≦)

Thank you! I'll hopefully have the next update out sometime soon. Gotta work around my college work so I can't give an exact date but I'm working on it!

This was a fun game, thanks for making it! I think there was a problem with using bank money to fund the road trip though? There was an alert box on the screen at least.

I see exactly what you mean, yes. Seems I forgot to close one of the variable declarations in that passage. I've already published a tiny update to fix this (0.2.3b) so it shouldn't be an issue anymore! Thank you very much for letting me know about it! Also, I'm glad you've enjoyed the game, thanks for playing it :)

There's an issue with the ending of the date with Holly. If you get the "true ending" it sets the wrong case flag and clicking "heading back to your car as well." will just take you to a blank page with no way to continue.

Alright, I took a look at that passage and as you stated the switch was looking for the wrong case. Changed it to look for "true ending" instead of "good ending true" and all is well with the world again. While looking at that whole passage, though, I saw that it had a few placeholder things that I forgot to go through and remove. Not sure how I managed to miss that back in April but uh, here we are. So I went through and edited some of the dialogue as well. name is now $name as it should be, among other things.

Updated files (0.2.2b) are live and all should be good now. Thanks for letting me know about the issue. If anything else is run amok just let me know and I'll get on it.

Glad to have helped. I noticed some weird formatting and incorrect grammar earlier in the game but they weren't all that much of an issue, unlike this one, which halted progress. Thanks for the quick response and fix!

First off, I love this game! As a younger furry in the fandom, it's nice to see some indie games that are SFW for a change. I did find some glitches, but that's to be expected for a game in progress! :)

In the beginning: I found a glitch where when you take the west path at the park, there's a continue button that does nothing.

If I find any more I'll reply to this comment, beautiful game and illustrations.

I'm glad you like the game! And yes, there is a lack of SFW furry games. That was one of the main elements that drove me to make this game.

I'm out and about today so I'll take a look at that continue button issue when I get back later. Just taking a peak at it from my phone, it should be a pretty easy fix. Definitely let me know if you run into any other issues.

And thank you for the compliments on the game. Kass certainly did a great job with illustrating Sasha and Holly, she's an awesome artist.

Simple fix, just had to move the continuelink outside of the nobr tag. New build (0.2.1b) has been pushed and that little glitch should be gone!

Hey I just finished chapter 3 and I feel like I did everything to take Holly on with me on the trip, but I could only take the option of taking just Sasha and Jacob. Other than that, I really enjoyed this, glad it was the part of the bundle :)

I checked that issue out and it would seem there was a misspelling with one of the variables. Which meant the prompt for taking Holly along with you on the trip wasn't triggering properly. I fixed it and pushed the updated files so the option to bring Holly along should popup now! Thanks for letting me know about it.

Thanks for the kind words as well! Makes me happy to see people enjoying my game :)

Found this game through the bundle and I'm super excited to see it continue and more chapters be added to the story!

On another note, the text at the end of the festival won't let me progress since its not clickable:

Glad you've been enjoying the game so far!

I took a look at that bug and got it fixed. Had an issue with the placement of the quotation marks I believe. I swear 99% of the bugs in this game are caused by little errors like that, it can be so annoying. I already pushed the updated files so everything should be good to go now.

Also, thanks for letting me know about the bug. If you run into any more issues just let me know and I'll look into it.

This'll be interesting! I'm honestly super glad I bought the bundle, wouldn't have found this without it being included

I've also come across a handful of games included in the bundle that I wouldn't have found otherwise. Whole thing is really cool, I'm glad Itch.io set it up.

Hope you enjoy the game!

For anyone coming here from the bundle, welcome! And thanks for supporting the fight against racial injustice! If you encounter any issues with the game feel free to let me know on here or on my Twitter page!

Tales from the Road is included in the Itch.io Bundle for Racial Justice and Equality. I highly recommend purchasing the bundle. $5 is the minimum donation amount and that gets you some really great games like Night in the Woods and Oxenfree. You'll also be supporting the NAACPLDF and Community Bail Fund.

Check it out here: https://itch.io/b/520/bundle-for-racial-justice-and-equality

After selecting "take a Nap." this happened

Got this one fixed. Somehow put a space instead of an underscore for a variable. Think I also got the other one fixed. Just forgot to put isnot instead of is. The proper dialogue should show up now. Thanks for letting me know.

Looks like I found another one xP
"You decide to part ways with Holly after the concert."
After this, Holly is still present

Can't proceed the game at this point because the text is not clickable.

"You shake the Tiger’s hand and introduce yourself as Dylan."

Cheers. Thanks for letting me know. All 3 of the bugs should be fixed now! 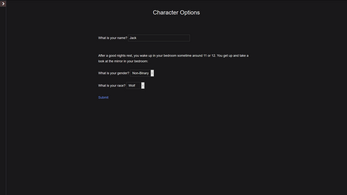 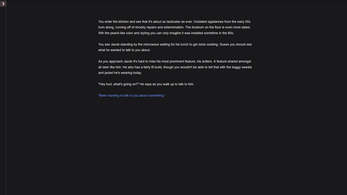 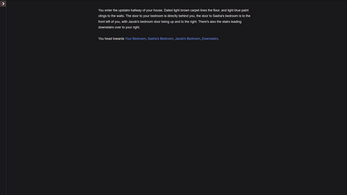 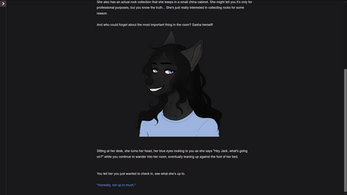 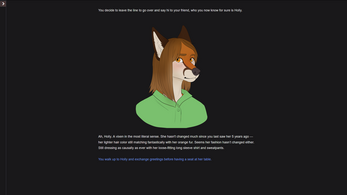 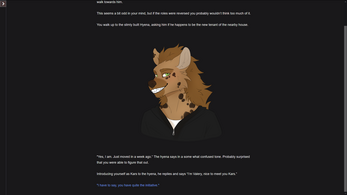 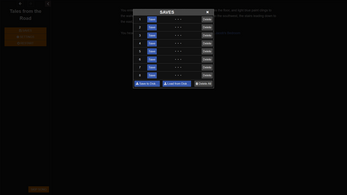 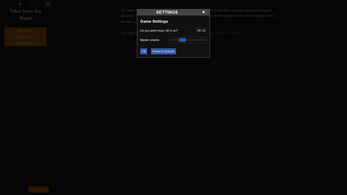